We know from lots of behavioral science literature the initial decision to join a retirement saving plan is one of the hardest, as there are lots of behavioral biases working against it, from loss aversion to status quo bias and many more. But what can we do to make this decision easier?

One of the best strategies to help people save for retirement is automatic enrollment under which workers are notified at the time of eligibility that they will be automatically enrolled in the plan with a default contribution rate and asset allocation unless they actively decide not to be enrolled. This strategy was much researched by the likes of Brigitte Madrian, James Choi, David Laibson and not to forget Shlomo Benartzi and Richard Thaler. They all proved mostly in the cases of U.S. defined contribution plans, that the strategy effectively increases enrollment rates all the way up to 80 or even 90% of all employees at certain companies that enabled auto-enrollment based retirement plans. In the last years we also saw the strategy proved itself in the United Kingdom that introduced it in retirement plans from 2012. After 9 years it is still going strong and even in the Covid-19 pandemic the opt-out rates remain at only 9 to 10 percent. To date it has helped more than 10 million people to start saving for retirement additionally (more on auto-enrollment in the UK in the report from Nest Insight). So if you ask me, after decades of research, automatic enrollment is the proven way to go, if employers or countries want to increase coverage of their private retirement plans.

Is there any other way to do it instead of just leaving the decision to the people on a voluntary basis? Sure there is and also quite an effective one. If auto-enrollment is the “soft” way to get people to save for retirement, as they still have the choice to opt-out, there is also the “hard” alternative to get people to save, which is to just make it mandatory. This has been the case in many countries and now after quite some time we can compare the effects on enrollment rates and also accumulated assets of private retirement plans and in the following article I will present a short overview of private retirement plans of Slovenia and Croatia, which are neighbouring Emerging European countries. Both established from scratch private retirement plans after the year 2000 and chose different paths how to get employees to participate in the new plans.

Slovenia went for the really “soft” approach and formed occupational and individual defined contribution retirement plans based on voluntary enrollment. Sure, there are tax incentives for participation, but as most by now already know, tax incentives have a very limited effect on individual decisions to save for retirement and they are also very expensive. More on their limited effect in my article from July 2020 and tax incentives only get you this far – which is in the case of Slovenia only 41% coverage rate of the working-age population and total assets of retirement plans of only 6.8% of GDP (both statistics from the OECD pension markets in Focus 2019) after 20 years of the new system. 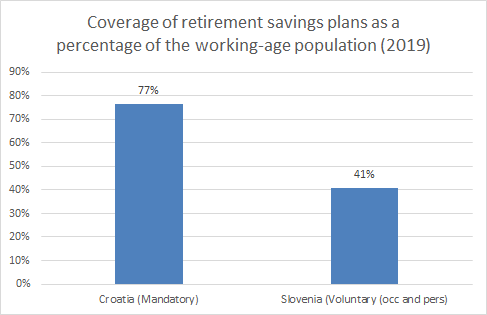 Croatia chose the “harder” approach and when the system was reformed in 2002 those over the age of 50 remained in the then existing pension system, whilst those between 40-50 could choose whether to join the new individual account system and those under 40 were required to join the new system. For those who joined the new system part of the social security contributions in the sum of 5% of their gross salary was diverted to new individual retirement saving accounts in a so-called carve out of social security contributions. On top of this there was also a new option enabled of totally voluntary contributions to the new retirement saving accounts as the third pillar option.

So, as is evident from the chart above, the effect on coverage rates is remarkable and in 2019 in Croatia 77% of the working-age population is covered by the retirement saving plans. Also the accumulated assets are now at 27.3% of GDP which is a great number for a system that will only next year be 20 years old. This is both thanks to coverage rates and contribution rates.

The comparison of annual nominal growth rates of pension assets from 2009 to 2019 in the chart below tells it all, as Croatia was growing annually much quicker than Slovenia. 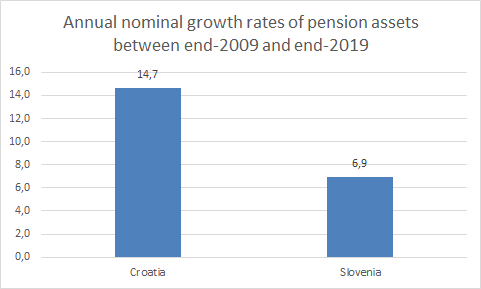 No matter what kind of tax incentives governments offer to employees to save for retirement and no matter what kind of other soft promotional activities there are, the underlying fact is, with this approach the best scenario you can hope for is short of 50% enrollment rate. Meaning at best you will have half of the working-age population saving for retirement and even with them in most cases contribution rates will not be sufficient. This was demonstrated in many cases all over the globe and the Croatia VS Slovenia example is just one of many. Time will also not change anything, as even in more mature systems with voluntary retirement saving enrollment rates get stuck near 50% and the only way to get past this is to implement auto-enrollment policies or to just make it mandatory.

Personally I’m more of a fan of auto-enrollment, as it showed clearly in the UK and now recently in a few US states with state-facilitated retirement saving plans like OregonSaves, Calsavers and others, that it can effectively increase enrollment rates with still leaving people the choice to participate or not. Just the simple, jet brilliant fact of turning the choice about participating in the plan around makes all of a difference and I do hope my home country of Slovenia will also soon follow suit.

Nudging people to save for retirement one nudge at a time. View more posts