End of 2020 the number of employees saving in the second pension pillar in Slovenia reached a record 574.219 members. This means the coverage rate is roughly 60 % of all persons in employment, which is a fairly decent rate for a 20 year old voluntary system, but if we correct the number and deduct the members of the civil servants retirement plan (approx. 240.000), which is mandatory, the coverage rate drops to a more sobering 35 % which is 1 percentage point lower than last year. Also not encouraging is that one third of members (32 %) were inactive last year, meaning they did not make any contribution payments in 2020.

So realistically the coverage rate is not great, which is no surprise given the voluntary nature of the second pension pillar in Slovenia, as we know from decades of behavioral science research and hard data that individuals very rarely save on their own for retirement and you can find many articles on my blog about this very subject. There are of course tax incentives to save for retirement in Slovenia, but also they have a very limited effect on encouraging individual retirement saving, as I had written in an article from July 2020. This is confirmed by data in Slovenia, as only approximately 2 % of employees save in individual retirement plans, the vast majority is saving in employer sponsored retirement plans. This is why access to an employer sponsored retirement plan is so very important.

On the positive note, total assets of pension funds recorded steady growth despite the pandemic and reached 2,81 billion Euros, representing a 7 % growth from 2019. Assets of pension funds as a percentage of GDP are at around  6%, which is low compared to some other emerging European countries, like neighbouring Croatia, where assets of retirement plans are close to 30 % of GDP. Croatia implemented mandatory enrolment in the second pension pillar roughly 20 years ago and now the big difference in the success of each system is clearly showing and you can read more about the comparison between the Slovene system with voluntary enrollment and Croatian with mandatory in my article from March 2021.

As is clear from the chart below, most assets in the Slovenia’s second pension pillar are managed by mutual and umbrella pension funds, followed by dedicated pension funds and insurance companies. 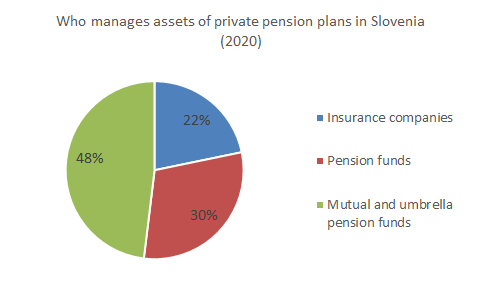 Given the relative youth of the private pension system in Slovenia currently only around 40.000 people are receiving monthly annuities and the statistics around how high are average annuities is unfortunately not compiled. I hope we will have more data on the decumulation phase in the future as this part is of course crucial for any retirement system and its main point to provide together with state pension an adequate income in retirement. 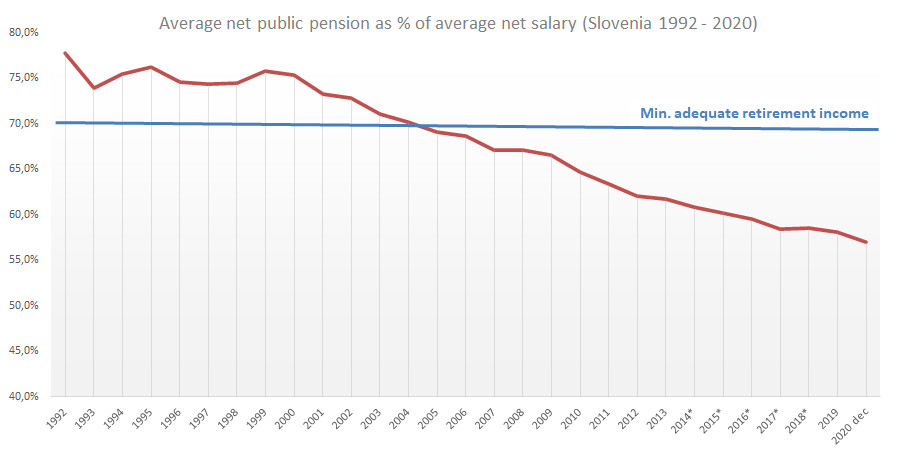 Where do we go from here?

One thing is certain, if we will not have any major reform of the private pension system in Slovenia the situation will remain as it is. The smaller percentage of people who are currently saving in the second pension pillar will reach adequate income in retirement, the rest unfortunately not and even though some still dream public pensions will in the future provide decent income in retirement, we see this is far from reality even today, let alone in the future, when the unavoidable demographic shift will put even more pressure on public finances and the first pension pillar will have less and less people (employees) paying into it and more and more people receiving benefits (retirees).

There are proven examples of possible solutions in other countries, such as auto-enrolment in workplace pension plans in the United Kingdom. It has in less than 10 years increased coverage rates from 60 to 90 % and today more than 10 million people are saving additionally for their retirement because of it. The Irish government is following the example and plans to introduce auto-enrolment in the next year and also some US states, like California, Oregon, Illinois, etc. are following the lead with implementation of state-facilitated retirement savings plans in which employees, who are currently not saving, are automatically enrolled in the new plans. You can read more about the latest progress of state-facilitated retirement plans in the US from Lisa Massena on the link.

As Einstein nicely put it “The definition of insanity is doing the same thing over and over again, but expecting different results.” meaning if the pension system in Slovenia is to provide adequate income in retirement for all, we need changes that will bring to life all three pension pillars as only the combination off all sources, both public and private, will be enough to provide adequate income in retirement in a sustainable way.

Nudging people to save for retirement one nudge at a time. View more posts